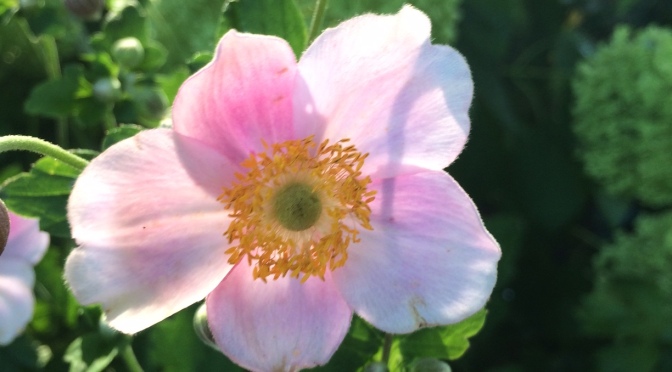 While walking the dog this morning a neighbor on the block who is a Master Gardener and works in the trade for a living was out trimming dead daisy heads off the profusion of plants in her front plot. “Did you have many visitors during the Garden Walk?” I asked. Her home was featured in a July tour of local gardens.

“Yes, but now the weeds are back. And I don’t really care. Summer’s over, as far as I’m concerned.”

She means the real growing season. For August marks the beginning of the dying season, as gardens go.

Not true out on the local restored prairies, but home in the land of prized perennials and annuals, it is indeed a period of mourning and acceptance among those who tend gardens. The lilies? All bloomed and leaning low. The spiderwort? It was a banner year for them, but their seeds have all shed except for the lone strange plant that cropped up in the front garden. I harvested those and will save them for a new spot come spring.

My garden is not the most carefully tended thing in the world. Keeping ahead of the weeds proved impossible at many points. I only won out late in July when a window of time allowed me to hack and yank enough to create some shape and beauty.

This latent response was insufficient for those who visit the home and care about such things. My daughter lectured on the bumper crop of maple trees. My companion lamented that gardens need more regular tending.

I am intensely aware of all that. But in defense of my approach this first three years of tending the garden myself, this is still a learning period. The first year was like the luxuriousness of an inheritance. The work of my late wife was everywhere. That was bittersweet. Then came the second year and my installation of another water feature along with a large expanse of additional woodland garden. I mulched deep piles of leaves and buried them under soil. This combination has produced good fodder for growth and recycled much of what otherwise would have gone into paper garbage bags to wind up who knows where.

This year I dug a sweeping curve of soil and made a ridge in which to transplant a fine line of nodding choral bells. At least that’s what I call them.

So my progress as a gardener has been measured in experimentation. Refinement, as a result, has had to wait.

It has also taken time to learn to identify the desirable plants in their early stages of growth. I moved some phlox around early in the season on a hunch and the results have been spectacular. Same with some coneflowers and other plants that I now know by heart. Many of the plants I now recognize. The lilies and the iris. The bergamot and sunflowers. Joe pye “weed” and many others.

Back of the mind

But I must not claim to have a zen relationship as yet with my gardens. The south section took off with weeds and creeping charlie and lurks like a bad thought in the back of my mind. I got out to lay garden cloth one morning and it rained on me during the process. Then obligations took over and the job never got finished.

Such is the life of a gardener in the learning phase. Many projects have gotten done. A nice new brick layout borders my fountain water feature.

There is still a party to be held in August. There will be new mums sprouting in my garden before then. August may be the end of gardening season, but it does not need to be the end of gardening. There is a zen component to keeping on with what you have. The official end of summer does not come until September 20 or so. That’s still seven weeks away.

There are still questions to be answered for the garden zen and now. I have yet to achieve that desired peace of a gardener in full flow. But it’s coming. Maybe next year. Or the next. It is a relationship that is both sustaining and challenging at once. It is the act of caregiving that gives back to the caregiver. The feeling may be fleeting and ephemeral when it comes. But the notion that all is right is worth pursuing for a lifetime.

The cycling tragedy of Helmut Jahn hits close to home

Ups and Downs and Sideways too

Bathing in love and respect

Step on the gas and wipe that tear away