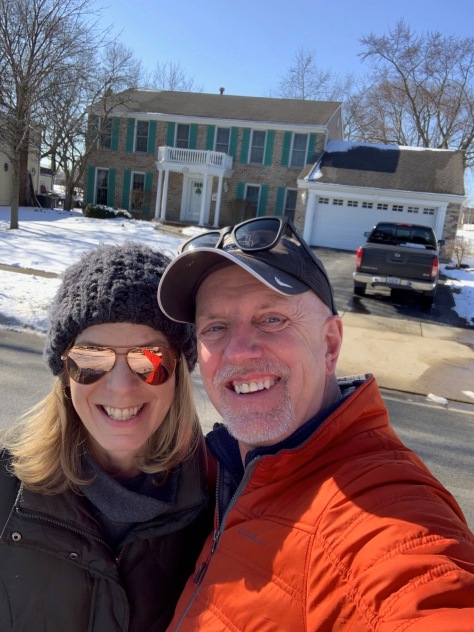 For Valentine’s Day, my wife and I drove to her hometown of Roselle, Illinois to take a tour of the neighborhoods and village where she grew up. I’ve kidded her about it for years, but I genuinely wanted to learn more about her youth because we came together later in life and were married three years ago.

I’ve called the trip the “Suzie Tour” after the fact that she chose to be called by her middle name fairly early in life. We’re a few years apart in age, as I’m a bit older, but talking about our lives made me realize there are many commonalities in the way we grew up.

Thus it was fun to see her family home perched on what is now a shady street. Her neighborhood was new then, and the small model home used to the market the houses on that block once sat on the lot where her folks built their home. It now sits in the park nearby, purchased by the city from the developer to serve as a warming house for skaters in the wintertime.

We stood out in front of her former house to take a photo and share it with her sister Julie, her mom and brother Tim.

From there we toured the nearby park where she grew up and played. Our dog Lucy joined us on a snowy, mushy walk around the town pond where her brother once hauled out a giant catfish.

She recalled nice memories of walking to the elementary school about five blocks away from her home. We drove slowly past the school that is now repurposed as a center for special education. So many of those elementary schools built in the sixties have that same low-slung look. I could imagine her life back then, carrying books back and forth to class, meeting up with cherished friends and growing older by the year, hardly knowing what the future would hold someday.

Then we drove to the Middle School and High Schools. Sue related how she and a close friend would sometimes walk home two or three miles from high school on warm days. “And I bet you talked…” I smiled over at her. She was looking out the window from the passenger seat of the car. “Oh, yeah…” she said dreamily.

We cruised through the massive parking lot where the marching band practiced. The band was highly regarded, and there may have been some majorette time in there at one point. But the practice. Oh, the practice involved in marching band. That’s how memories always seem to be built. The hard work we put in at various stages of life, especially those formative years. It does eventually pay off. It is good to have pride in those experiences.

As we drove around and talked, she chuckled in recalling how she was kind of the nerdy one (the ‘brainiac’) while her sister was involved in both athletics and was a cheerleader, “The popular one…” she laughed with a degree of sisterly sarcasm. “We had our sister fights now and then,” she replied when I asked about the social dynamics of her relationship.

The highlight of the trip for me was tracing the route she used to ride on her bike from her house to the public pool. That’s where she grew up competing for the swim team, working as a guard and riding her bike back and forth on warm summer days. I asked her about the color of their guard suits and she said “Blue,” I could imagine her tan skin against that blue suit fading after all those hours in the summer sun. “I used to take on extra shifts when other guards went on vacation,” she mused. “Sometimes I’d be so out of it…”

And she swam. She’s still a great swimmer to this day. Her back muscles and shoulders are strong and well-developed.

Those pool memories had me recalling my own summer days at our local pool. I fell in love with a lifeguard or two as a child. Now I’m married to one. It’s funny how these years tend to wind together in the DNA of our lives.

And that’s why I wanted to go on the Suzie Tour with her.