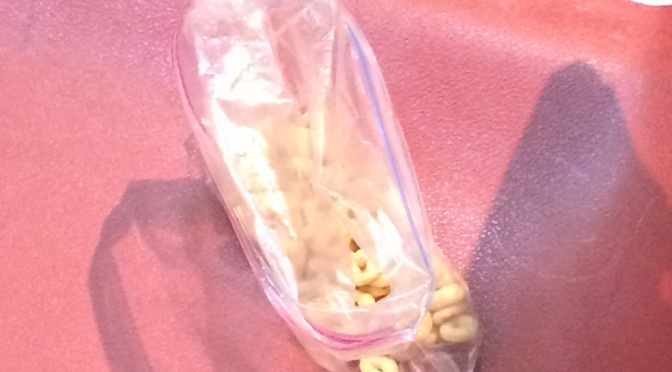 The praise service at our church is something of a refuge for parents of young children who want to attend services. With its open format of chairs arranged in semi-circles and a liturgy formed around singing every few minutes, young parents have flexibility to keep their toddlers busy while still paying attention to the message.

One mother had the requisite bag of Cheerios in a plastic bag. That gave her youngest child something to preoccupy his time. The other son was handily wrapped in his father’s arms. Those two played staring and face games for most of the service.

It all brought back memories of tending my own children in church when they were very young. Of course one legendary incident with a plastic bag of Cheerios stands out. My son was perhaps two when the great Cheerio Sneeze occurred. It was the late 1980s and women were sporting particularly fluffy hairstyles. One young gal sitting three rows up had no idea that after my son sneezed while eating Cheerios the sticky residue had flown forth and stuck in her coiffed hair. That is, until she reached back to feel the constellation of Cheerios goo stuck to her blow-dried locks.

It had been funny enough those first few minutes after the sneeze. The guy sitting next to me in church was suffering through a laughing fit so profound his wife was literally hammering him in the side with her elbow to get him to stop. My wife glanced over at me with that “don’t you dare laugh” look wives reserve for their husbands in such situations. But I had already lost it. My son was covered in Cheerio backdraft somehow and the sight of that stuff at close hand when I knew it was also stuck in a woman’s hair three rows up was too much to handle. I was gut laughing and there was nothing to do about it.

Such is the life of young parents. You pretty much have to roll with the problems you face. Kids are unpredictable little mess machines. Every young mom I’ve ever known carries with her The Purse that contains solutions to all such emergencies. In it are diapers and sippy cups and medicine and who knows what else. The Purse could likely be used to get wounded men through an emergency in war, if need be.

It takes both practicality and humility to be a young parent. When your child erupts in mournful crying during church or at some other social event you know the drill; take quick action and hope it works. There is rocking and soothing and if all that doesn’t work (along with the offer of a bag of Cheerios) there is always the patented move known as the Quick Exit. Off you go into the netherlands of some bland hallway where no human being should ever be confined. Your child’s sad face either convulses further or turns to laughter. There is no predicting the outcome.

Unzipped and dealing with it

It really doesn’t get much better as you age. Your child grows a mind of their own and they make mistakes about which you can only shake your head and ask, “What did I do wrong? And then you think back to something like the Cheerios Sneeze incident and realize that you did nothing wrong really. Life is random and stuff like this happens.

I think also of the day my son and I sat next to each other in church while a young mother a few rows up and across the aisle struggled with her rambunctious son. He kept crawling under the pews and every time she bent dow to catch him the zipper on the back of her dress dropped a few more zips. Apparently she’d forgotten to get the clasp that held the back together and everyone in church could see where this was headed. It all happened fast and when she stood up to carry the child out of church her entire dress dropped to the floor. In church. My 5-year-old son gasped and my wife muttered a low “Ohh nooo” as the woman scrambled to pull the dress back up over her bra and panties.

Yes, it was humiliating. But there was not a person in the church community that day who laughed. We’ve all been there in one way or another. We all felt bad for the young mom losing her dress because those of us that had experienced parenthood were laid bare in a thousand other ways over the years.

Besides, it did not matter. What mattered was that her friend quickly leapt to her aid and all was rectified right there on the spot. To her credit, she hung right in there and stuck it out through church.What we also witnessed was the benefit of caregiving. Stepping in when needed. Saving face for someone else. That takes character on both ends. Sometimes humility is the bravest thing you can wield in this world. That young mother wielded it like a hero that morning.

When you are older and sit behind a couple with young children at church there are moments when you want to lean forward and share all that you know about how it works. That embarrassing moments will not kill you. That being a parent is both a humbling and emboldening endeavor.

The best thing you can do sometimes is simply look the other way so that mom or dad can do their business and navigate through any situations that can crop up. Then shake their hand during the Sharing of Peace and make sure you don’t put it near your mouth until after service when you can go wash your hands and get rid of any potential Kid Germs from colds or flu. That’s how it works in this world. The right kind of parenthood never really stops, and if you’ve learned anything from the experience at all, you’ll know that staying well is the first line of priority. Because it’s your job to care. For the kids. And for yourself.

Christopher Cudworth is author of the book The Right Kind of Pride about facing life’s challenges. It is available on Amazon.com.

50 Years of Running: Picture this

50 Years of Running: Don’t be a dick about being a jock.