Many years back, when I was still single and engaged in a long distance relationship with the woman I’d eventually marry, we ached to be together during the Thanksgiving holiday. She flew out to Philadelphia where I’d been sent on a job transfer and we made the best of it. I grabbed the literal last turkey in the grocery store and we baked it in the oven. Then we parted ways again until Christmas.

We’d only met the previous year in October. Any plan of being together long-term was just formulating. Early the next year, the company that moved me out East dumped the entire marketing department. I was left trying to decide what to do next. Stay out East, or move back to the Midwest?

I moved back to live with a friend in downtown Chicago and spent the next couple years living a dual life between the city and suburbs. That was a period of great change and experimentation. After a couple of years, I’d had enough of the Bohemian city life. We got engaged and married the following year.

From there, it felt like a blur of events as our first child came along, then another. We celebrated holidays with our respective families. Those days of celebration together rolled on. Mostly we got together at her family home where her parents were always wonderful hosts. Sometimes my parents would join those festivities. Over the years, we also invited friends to add to our joy.

Our Christmases were filled with family togetherness. The anticipation of opening presents with the kids was so high some years we had to let them open a small gift before the rest of the family got up so they wouldn’t burst from the pressure of expectation. Our kids were always respectful, but when they had a hint of the goodies to come, it was cruel to make them wait several hours to open the “big gift” that they’d requested.

Early on, one of those “big gifts” was the Red Ryder BB Gun from the movie A Christmas Story. It became a new tradition in the annual celebration along with watching the movie umpteen million times.

My father-in-law loved those Christmas mornings more than anything on earth. He also made a big deal out of Easter joys and the annual Easter Egg hunts as well.

His birthday was on the Fourth of July, so that day was always filled grilling steaks and setting off backyard fireworks of the milder kind, except the year that his son and friends loaded up with a stash from across the border in Indiana and blew off so many fireworks the police showed up to confiscate many of them. When the cops arrived, my father salted away the major part of the fireworks stash in the garage. He was a conservative guy by trade, but he also loved a bit of fun. That’s how they did things out in the Nebraska hinterlands where he grew up. You had fun until you got caught. Most of the time, you still got away with it.

These days that father-in-law is gone. He passed away during leadup to Christmas 2012, the year before his daughter, my late wife, passed away after eight years of ovarian cancer treatments. These days, my mother-in-law is quite alive and doing well. But we’re cautious with our visits given the Covid-19 pandemic. My own mother and father passed away in 2005 and 2015, respectively.

So we’ll be apart this year on many fronts. My son lives in Venice, California and the state is rife with Coronavirus, so he’s sitting tight. I cancelled a planned visit with him earlier this year over concerns of infection myself. This will be his time in 34 years that he’s not in company with direct family during the Christmas holidays. It hurts to be apart. But there also comes a point in everyone’s life when circumstances or other interruptions place things out of our control. This is an inside joke with my children, but those changes really do “build character.”

My daughter and her boyfriend live nearby, and we’ll likely see each other. But they’re cautious about the Coronavirus too. Even more than I. So we’ll all Zoom with my sister-in-law and brother-in-law and make the best of this holiday the way we have always done. That’s what most families typically do during the holiday season anyway. We go through the motions of opening presents, but to our group’s credit over the years, we dialed that down quite a bit, choosing one person to “gift” each year, and we’d buy or make small themed things for the rest of the family. That took the pressure off the shopping. We could all focus on the joy of appreciation instead. I’m always grateful we did that. It was the right kind of pride to turn our attention away from the presents and toward the relationships.

Our holiday get-togethers were always mixed in with long naps from food comas and other indulgences. For many people, that’s a big part of being together. Letting everyone have their time and space. Sometimes, it’s the unchanging nature of the holidays that makes them special.

We’ve added some critters to our celebrations over the years. This little dog Chuck is a rescue that is now almost fourteen years old. My son has a dog named Luke Skybarker that he’s brought home from the holidays. This will be the second Christmas with our dog Lucy for my wife Sue and I. We’ve all adopted these pups and some cats because they bring change (and joy) into our lives each day.

It’s also true that life’s changes come along whether we like it or not. That’s why finding joy amid the changes in the moment is important. The ache of times past comes from the happy remembrance of shared celebrations. That is the inseparable bond from which we can draw strength. When our hearts ache from being apart, we turn to that. But there is also the joy of creating new traditions, celebrating with newfound connections as well. Over the years, we brought people into our circle to share those bonds. That’s a tradition we should all embrace. Make the world our family.

If this year has proven anything, it is that increasing the breadth of that “circle” is the reason we’re all here. Reach out. Make it happen. The world needs you. Celebrate Christmas or whatever you do by connecting in new ways and old. That’s what this is all about. Peace. And joy to you. 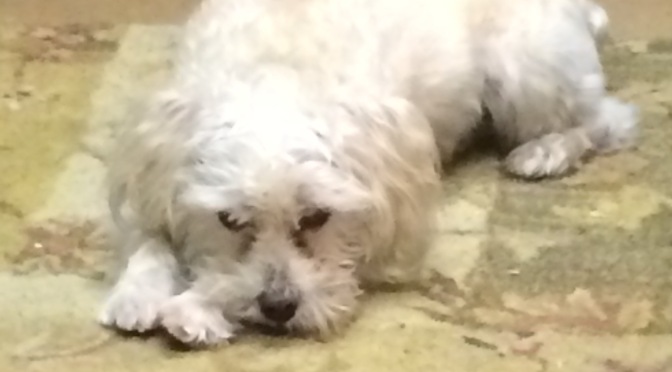 We buy Christmas presents for our dog. But we really buy them for us.

To Chuck, the schnauzer-poodle mix rescued by my son and friends from a Chicago street at two in the morning, every day is Christmas as long as his “people” are around.

He also has a penchant for chocolate that can kill him if we’re not careful. Just last week he discovered a Thanksgiving bit of cast off chocolate in the three-season room where he typically does not gain access in the winter months. He pushed open the door and dove into those wrappers to find that lone bit of chocolate and ate it fast as he could.

For an hour he shivered and felt sick. I kept an eye on him when I discovered what he’d done. A year or so ago we made a trip to the pet emergency clinic when he grabbed a piece of dark chocolate I’d been nibbling off the light table in the living room. That made him really sick. His affect was off and he hid under the table before I took him shivering and weird to the veterinarian’s office. They made him barf and found a piece of green eraser in the mix. I was chagrined at that as well.

When I apologized for letting him get to the chocolate, the vet staff laughed and said, “Don’t feel too bad. The other four dogs here all ate panties.”

Okay, I thought. Perhaps Chuck isn’t so bad after all. He just eats like a dog. At least he doesn’t have any human fetishes.

Now that my kids are home for Christmas he’s torn in his loyalties toward my son, who originally found him and was his first owner. Yet it was my daughter that wanted to bring him home once Evan started to travel in his job. So Chuck came west from Chicago and took to my late wife as well. She’d stated for 20 years of marriage that we never wanted to own a dog. 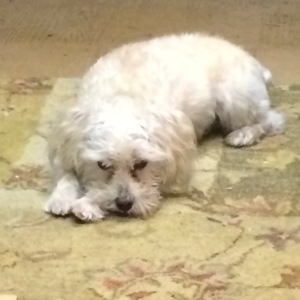 But he won her heart and Chuck has become part of the broader family network of in-laws and friends who tolerate his manic three minute greetings. He loves a good pet once he settles down and has been known to keep many a visitor company on sleepovers.

So Christmas is nice but Chuck lives in a different universe from us. He’s grateful for his twice-daily walks. I let him have his “time” at the lightposts and other sniffing spots. He also has a few doggy girlfriends with whom he visits in the park. He doesn’t get overfed or too many treats. We’re grateful he’s been healthy and happy with the exception of those tiny burrs he keeps finding in the garden somewhere. It takes an hour to get them out of his hair.

I’ll take the liberty of speaking for Chuck and say that he wishes you all a very Merry Christmas. He’ll be tearing up wrapping paper when we open gifts. He’ll probably get a few table scraps but not too many. And when it’s all done he’ll join us during the Christmas Night party my children host at our house for friends. That’s a new tradition and Chuck just loves it when the house is full. But by late in the evening he’ll tuck in the corner of the couch somewhere and start to sleep it all off. The day after Christmas is another day of joys for Chuck. You don’t even have to buy him anything. Just give him love. Love is all you need.

The cycling tragedy of Helmut Jahn hits close to home

Ups and Downs and Sideways too

Bathing in love and respect

Step on the gas and wipe that tear away