Recently my son Evan drove west to California for a new venture in his career. On the way, he stopped by the South Rim of the Grand Canyon. Approaching the park, the snow was two feet deep, he informed us. He arrived in time to see the sun setting.

Back home, my daughter made note on her social media account that she misses nature. That can happen for all of us. But Emily has made a point of immersing herself in concern for nature. She’s learned the plight of bees and butterflies, and captures her instinctual love for these creatures in amazing photographs.

Their mother Linda Cudworth would have been 59 years old today. She would have loved to hear the enthusiasm of her son Evan as he sat on the canyon rim going Live on Facebook as his many connections shared the moment.

She would also have been appreciative of the fact that her daughter embraces those bees and butterflies with such verve and purpose. We all learned monarch ranching from Linda Cudworth during the summer months. In the years since she passed away from ovarian cancer in 2013, we’ve ranched a few monarchs of our own. One summer we released 50 of the insects back into the wild after raising them from eggs detected on the bottom of a milkweed leaf. They would eat their way through the caterpillar stage and emerge from a chrysalis into free-flying male or female butterflies. Symbolic, you might say, of so many transitions in life.

My daughter has a tattoo of monarchs and bees on her shoulder. My son has a symbolic symbol of flowers on his chest. But the real legacy is the tattoo she impressed upon their hearts through her exceptional care as a mother.

In all those years of marriage, I observed her dedication to such things. She invited the neighbor kids over to catch bugs and to show them the secret faces of nodding spring wildflowers and summer lilies. Some of these beauties have been transplanted from the garden we started in Batavia two decades ago. I gathered up the lily bulbs and inserted their yellow and white forms into the soil behind the house now shared with my fiancee.

These symbolize the fact that life indeed goes on. My children and in-laws have shared many memories of Linda over the last four years. We keep that legacy alive. But I am also fortunate to have met a woman that is not threatened or jealous of that legacy. As a result, it never needs be denied.

I believe my children can feel that in their lives. I certainly hope they do. It has been difficult at times to know how much to insert myself into their lives. On one hand, it is important not to helicopter their thoughts or experiences. On the other hand, a father to children that have lost their mother has an additional role to play.

What we have all tried to do, and I include my wife-t0-be’s family in this, is honor the legacy of the life we’ve lived and find the honor of the legacy we’re creating together. This is the true cycle of life, where love is at the heart, and people gather around it to share in the hope and determination required to embrace this world.

The fact that my children are now drawing upon nature for inspiration is likewise an inspiration to me. It shows that those many walks in the forest preserves (or ‘forced preserves,’ as my son once thought we were saying) were for good reasons.

Following my wife’s passing, my children and I took some of her ashes and distributed them in the heart of a massive prairie. The sun was setting and we all recalled how she loved the place for its open spaces and its prairie soul. I thought about those ashes as I biked through the prairie yesterday, and how strange it really is that we all come and go in our time.

That is reason enough to hold on to the legacies that matter in our lives. And to make new rejoicing in the fact that we are here, and alive, where the flicker of butterfly wings demand our attention yet so many people seem to deny their importance in favor of this virtual mess going on this world.

No fan of fools

I can say without hesitation that my late wife would have been disgusted by all that has transpired in the last four years. She was a keen fan of the former President, whom she simply called “Barack” with a touch of respect and love in her voice.

While she was a loving person, she did not suffer fools gladly. We all loved her biting sense of humor that emerged at often unexpected times. There was always a touch of leadership in such remarks. “Don’t be fooled by fools,” she’d often intimate. So you can imagine how disgusted she would have been at the election of Donald Trump as President. A part of me is honestly glad she does not have to abide the mortal offense.

Because her dedication to the needs of small children and the practicalities of public and private education were evident in her preschool teaching. I specifically recall her admiration for a mother from the Hindu faith that brought their child to the Christian preschool where she taught. “There are many paths to God,” the woman responded when asked if there were any concerns with the educational format.

Likewise, my late wife’s training in special education revealed her deep concern for the humble and less fortunate in this world. Arrogance by principle she did not abide, nor false pride. She worked with high school students with learning disabilities that included profound degrees of autism. Yet she also guided one of her students through the challenges of high school to make it through college and earn a playing spot in the NBA.

Many a social evening were spent with our close friends who were also teachers. Few people outside the teaching profession can comprehend the many ways teachers go beyond their job descriptions to positively affect the lives of young people in public education. And while my late wife genuinely thought the athletic world a bit vain, she also volunteered to direct the Cheer Club at the high school.

Her amused disregard for athletic vanity could have its humorous consequences. When I took up cycling, she made fun of my tight-fitting cycling “kits” and called me Lady Legs for the tradition of shaving my gams, as serious cyclists do. Heck, back when we were dating, and I held back from going out the night before a running race, she teased that I had Golden Leg Syndrome.

Yet I persisted in my pursuits despite this brand of teasing, because every couple uses the other for balance. It does not pay to be too co-dependent either. So we found our respective spaces in this life, and worked together to encourage that same self-confidence and hunger for growth in our children. I see that belief at work in them still, and pray that they can continue to find love in this world among people who support it. That is the legacy that is still alive.

A few weeks before she passed away from ovarian cancer, my late wife pulled me aside and said, “Chris, I’m sorry about the junk.” She was referring to the many things a couple collects in 27 years of marriage. Over the last year it has been an interesting and sometimes emotionally challenging process to make decisions about what or what not to keep. Some of it was hers, and hers alone. Much of her clothing went to friends and charity. Her jewelry went to friends with the exception of a few meaningful keepsakes saved in her favorite jewelry boxes. Room by room it has been a tour through our lives together.

But the Christmas Closet is the biggest challenge of all. Jammed tight with strings of lights and glittering ornaments, thick in boxes and wedged with holiday paper stock and more lights, that closet has been on my mind for nearly two years.

This morning seemed like the right time to pull everything out and take stock. I found a few surprises such as a box labeled “Christmas Lights 2015 Good” that would have saved a few dollars on lights for the tree this year. It seems that like most families, Christmas memories are something we treasure but also soon forget.

And one must be forgiven for that. The holidays as a whole tend to be much like the Christmas Closet at our house. A jumble of lights and half-wrapped presents and suddenly it’s over. Then we stash it all away for another year.

Only when you never attempt to clean out the Christmas Closet it becomes layer upon layer of half-utilized sentiment. And think about it: keeping a year-round closet chock full of Christmas decorations is a bit warped.

It’s tough to wrest ourselves free some such sentiment. In July when we’re yanking regular old wrapping paper out of the Christmas Closet to give gifts to our friends or relatives, all that Christmas stuff looks absurd. But once Halloween has turned over the mind turns to winter and Christmas lurks. First the colors brown and orange emerge for Thanksgiving. There’s plenty of that stuff in our Christmas Closet too. It tends to intermingle with the red and green of winter decorations. That’s what makes it so tough at times to decorate. It seems like the entire holiday season extends from October 15 through January 15th.

So I’ll be bold. Come out and say it. At some point, we have to clean out our Christmas Closets for our own sanity.

That means right now there is a living room full of boxes and…and strings of lights, and…and candles and you name it. Some of it has to go. Even my late wife would have to admit that. She’d several times promised to give that closet the once-over. Yet it never happened.

News of the Day 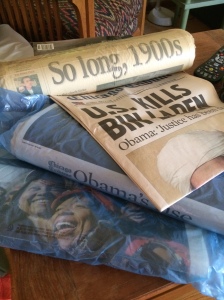 There were a couple surprises waiting at the bottom of the storage. The two newspapers featuring the election of Barack Obama were stashed there, still in the wrappers in which they arrived. She was excited about Barack. She read his books and liked his character. Before she died she wondered aloud why so many people chose to hate the man. “He’s trying to do the right thing,” she said with some irritation at the manner in which political opponents threw up absurd barriers to his policies.

Below those newspapers was another announcing the new Millennium as well. That was published before cancer entered our lives. Anyone remember what a big deal Y2K really was? It kind of makes you realize our fears and politics and ideologies really don’t matter that much. What matters is caring about others.

And that’s how it goes with things like Christmas Closets. It’s a holiday that rends our souls in so many ways. That is made so clear when watching movies such as “It’s a Wonderful Life.” The stuff that really matters lurks behind all the trappings and the snow and the trauma of family and work challenges.

So it helps in some ways to clear out our collective Christmas Closets and take a look at what our lives really mean. The junk we accumulate to celebrate Christmas is not the purpose of the holiday. Otherwise we could walk in that closet in April or July or September and pull out lights to get in the Christmas spirit.

Christopher Cudworth is the author of The Right Kind of Pride, a book about character, caregiving and community. It is available on Amazon.com.

Confessions of a mediocre jumper

There’s a right way to go bananas in endurance sports

Take pride in that aging face