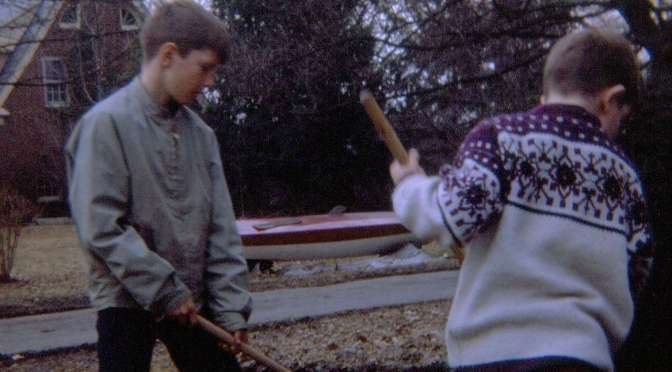 As a kid who loved being outdoors there was never shortage of burrs in my socks or mud on my pants. My roots were rural. Both parents grew up on Upstate New York farms on the banks of the Susquehanna River near Bainbridge. We freuqently traveled back to visit those farms. That also meant time spent shoveling manure into troughs in the barn and hanging out in the upstairs of the barn where mountains of dusty hay made a great playground.

These rural experiences colored my worldview about what is valuable and true in life. My brothers and I developed a land ethic that led us to become avid birders. That led me into a life of painting birds, wildlife and landscapes.

In some ways that formatively rural background was vital to becoming who I am today. Yet there were drawbacks as well to the innocence and joy found in outdoor experiences. While my mother and father both attended college and were well educated (mom at Potsdam University in Music Education and my father at Cornell and electrical engineering) there was a certain simplicity to their worldviews in having come right from the farm into the larger world.

That is no criticism. But it is reality. Throughout my early years there were many times when I sensed a gap in my understanding about how the world really works versus the manner in which I believed it worked.

My brothers evolved a quite sophisticated understanding of music and social graces. We all excelled in athletics. But we also wrote poetry, produced art and loved insightful banter.

But there was always a bit of hayseed lurking in our past. I once even had a track teammate walk up to me and say, “You know what? You’re a hayseed.”

He was right. There was so much about the world that was so hard for me to understand. There were social graces that escaped me. Even basic knowledge sometimes came as a revelation. I readily confess all that.

It’s not that the kids around me were much less rural in outlook than I. In fact the high school I attended was surrounded on all four sides by cornfields. Many of my classmates were farmers. Yet they also seemed to grasp the life ahead so much better. Business and such.

When I attended a small college my worldview grew some, but not that much. Back in Illinois for work as an admissions counselor, I was still shy and scared of the city. I didn’t know how it worked. I was still a hayseed.

Fortunately through years of reading and experiences the hayseed in me represents a percentage but not all of my worldview. But it’s still there in important ways as well. Never have I lost that connection between the natural world and its importance to all of us. It even infuses my religion and an appreciation that the faith we know as Christianity is deeply dependent on the same rural roots from which my own worldview has grown. The Bible is inextricably woven with organic symbols and metaphors that drive our knowledge of God. Our grasp of spiritual principles emanates from a long series of highly significant natural symbols from Genesis to Revelation. Jesus taught using these organic symbols because he knew that people need to be able to go back to basics to grasp the greatness of God.

Whether it’s a hayseed or a mustard seed, great faith can some from small things. That’s a lesson we should never ignore.