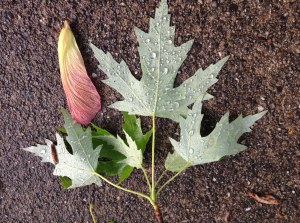 A few weeks ago I attended a live music show led by my sister-in-law’s boyfriend Tom, a professional guitarist with a really good voice who performs with a crackshot bunch of horn players. Midway through the show the band played a couple numbers by the 60s group Blood, Sweat and Tears. One of the guest singers absolutely nailed the BSWT song, “God Bless the Child,” but there was another song running through my head the rest of the night. It’s a tune called And When I Die that was a part of the amazing lexicon of music produced in the late 1960s. The lyrics start like this:

I’m not scared of dying
And I, don’t really care
If it’s peace you find in dying
Well then, let the time be near

As a kid of 12 or 13 at the time, those were odd words to read. At that point in the life, the idea of dying was so mysterious, and most of the deaths of grandparents had happened before I even arrived on earth. My mother’s parents were both gone years before, and my father’s mother too. They were ghosts, essentially, about which people did not even talk all that much. It spooked me to think about anyone dying, for these reasons. But there was some strange hope in the song with the lyrics Go Naturally as well..

And when I die, and when I’m gone
There’ll be, one child born
In this world
To carry on, to carry on

Many years passed before anyone close to me died. I lost a classmate from college track who became too dehydrated from having a cold while competing in track. His fever shot through 107-degree mark and he passed away in his room.

During that time of life (and like so many young people) I was grappling with the meaning of my faith, and whether it existed at all….

I had my own brush with possible death as early as my freshman year in college. Someone made a punch for the cross country team party and it nearly cancelled my liver that night. I could easily have died of alcohol poisoning. And what a waste that might have been. So much life left to live…

Through the mists of the years I learned that sadness and anxiety and depression could be scary things, but not as scary as giving up. On the few occasions when I felt like life was too much to bear, my mind considered what it would be like to end it all. But there was no motivation to do so. Perhaps my personal faith really did have a purpose.
Here I go!
Hey hey
Here come the devil
Right behind
Look out children, here he come
Here he come, heyyy

Then came middle age, and the challenge of managing a parent through the final year of her life. My mother died at age 80 in 2005. I was there when she passed away. Sitting inches from her bed, I could see that the week she spent in hospice was the right thing to do. She had experienced a stroke after a try at chemotherapy and her body was done with this world. That was so clear that my mourning was rich with that knowledge. It strengthened me to know that dying is in many ways not the end we all dread. It is a part of life.

And when I die, and when I’m dead
Dead and gone
There’ll be
One child born, in our world
To carry on, to carry on

That same year my wife was diagnosed with cancer, and I can tell you that scared the ever living daylights out of me. More than dying, cancer was a ghost of dastardly proportion. And yet we helped her survive through bout after bout of chemo, and our personal faith delivered small miracles that added up to one big miracle. She was still here. She had not yet died.

But after eight years her body was also through dealing with the rolling effects of chemo and surgeries and stress. I was sitting with my two children in our living room when she passed away. And days later, an astronomy student friend of my daughter staying over at our house to keep us company awoke in the middle of the living room in the middle to the sight of three floating orbs of light right at the spot where my wife had lay when she died.

There was nothing frightening about this to us. This was no hooky spooky ghost or something imagined by my daughter’s friend out of fear of death. This was a person with the mind of a scientist witnessing something beautiful and wondrous being the sphere of human imagination.

You can doubt us if you like. Or you can wonder aloud to yourself if what we see day by day is everything we can possibly know. There’s more than one way to go naturally, you see.

A few months before my wife died her own father died in a hospital bed. My wife raised herself from a cancer surgery two days after recovery and we made the trek to visit her father. The look they exchanged upon greeting each other was beyond the realm of language to describe. It was an eternal connection, something made from the fabric of time itself. A few days later, having seen that his own daughter had survived her surgery, her father passed into eternity itself.

And this past week my father died of ultimately natural causes. He was a stroke survivor for thirteen years. His four sons all visited him the last week of his life, and when his youngest had made a visit to the hospital one more time, my father passed quietly into death that afternoon.

The hospital called to tell me the news and I made the trip up to sit with my father in his room. I had a good, long cry at his bedside before kneeling down to say the Lord’s Prayer. He was no longer a praying man himself, I think he would have told you. But he said many prayers in other ways over the years.

Which leaves more than one more child to carry on. To go naturally is the greatest gift of all. Even if there are bumps and sways and difficult operations along the way, in the end we all go naturally. Death is part of life. It teaches and it cajoles. It offers us an ending to consider, one that we may try to write a little differently, and delay indefinitely, but it will come eventually.

Let’s admit this is not a bad thing. The enigmatic lead character in the movie the Green Mile is both blessed and cursed to live on, perhaps into eternity, watching his loved ones and found ones all pass away before him. He cannot go naturally into the night. He is given a glimpse of the burden of God and Christ himself. There is great love in that, but also a burden to care.

Which is why people speak of going to their final resting place. A good rest will often do you good. We may not know what comes in the great beyond, but what we know of getting there is enhanced by the fact of our very ephemeral being. It is ours to go naturally through our days, and love life in every way we can along the way.

50 Years of Running: Petrified into silence

50 Years of Running: The Achilles Heel